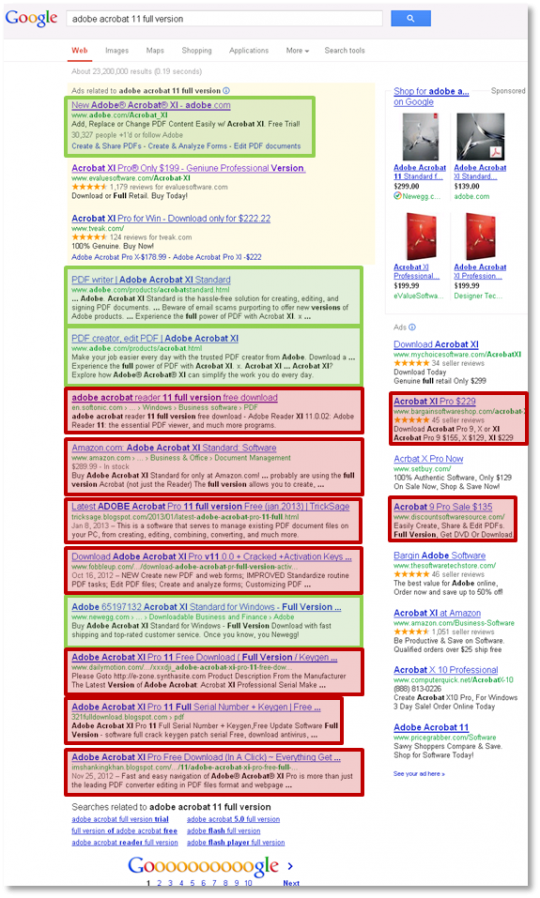 How Well-Intentioned Users Can Become Victims of Piracy

Not all software misuse is malicious. Often times end-users may not even be aware that the software they are using is unlicensed. These accidental software pirates want to be in compliance and often believe they have a genuine copy of the software and are using it properly.

Digital distribution of software has made it easier and more efficient for counterfeiters and pirates to get unlicensed software into the hands of the end-user.

As Alex Kochis discussed in our recent webinar “Finding Software Pirates Who Will Pay,” when searching to purchase a license for a product (or even find a discounted version), it’s often hard to distinguish the genuine from the counterfeit. In the example to the right, the search results for the popular “Adobe Acrobat 11 full version” shows that more than half of the first page results (both paid and organic) are products being sold by counterfeiters. Although there are some listings for free versions, there are also listings for products being sold at or near the retail price of the product. It’s easy for customers to fall into the trap of obtaining an unlicensed product.

Are you a bargain shopper? I know I love a great deal. Maybe you saw a great deal on eBay for that desktop productivity solution you wanted. Bargain shopping for software can lead to misuse as software counterfeiters have become so sophisticated that it is hard to tell the legitimate copies from the fake.

You may be able to spot the counterfeit versions, but could your mom? How about your Uncle Fred who is always calling you for tech support?

In many cases, the software being used was legitimately purchased, but could be used beyond the scope of the license agreement. You know when someone purchases a software license and they get to that big long page with all those words that they don’t read, but instead just click “Yes, I accept?” Those are the terms of the end-user license agreement (EULA), a contract between the licensor and the purchaser, establishing the purchaser’s right to use the software. Violation of the EULA can lead to software misuse.

A common example of this type of misuse is overuse, where the end-user has installed the software on more machines than the license agreement allows. An employee at your company is working on a project at the office and decides to take that work home with them, but they need that software to complete the project. So they copy the installer file onto a flash drive, bring it home and install the software on their home computer. Seems innocent enough, but it is another example of overuse. If a company has only purchased a single copy of the software and it is being installed on multiple computers, they are violating the license agreement.

It’s not surprising that end-users can get confused when purchasing software, but the good news for software vendors is that although these accidental software pirates may be in violation of their license agreements, they are keen to be compliant. They are not maliciously stealing your product, they are truly victims of piracy and have a willingness and means to pay for the software, once they are notified. Your job as the software vendor is segmenting and targeting these users with a conversion program to get them to become happy, paying customers.