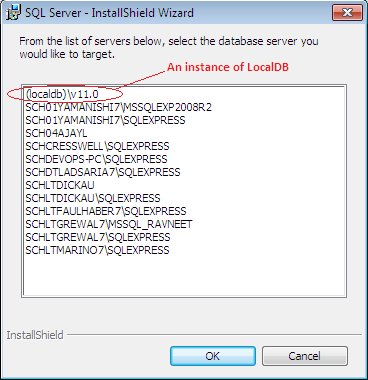 In order to enable connecting to LocalDB, you must switch to use the SQL Server 2012 Native Client OLE DB provider by following the steps below:

Note that InstallShield 2012 Spring does not include support for installing LocalDB named instances. If you want to create or delete named instances of LocalDB on target systems, consider using the SqlLocalDB Utility or writing your own code that calls the LocalDB Instance APIs.

The following example creates an instance of LocalDB named SampleInstance and starts the instance: