Each month we check in with a member of the V.i. Labs Piracy Investigation Team to see what trends they’re seeing in software piracy. This month tells us about the impact Chinese New Year had on new piracy infringements.

It’s no secret that piracy in China is an ongoing battle. When you look at our aggregated CodeArmor Intelligence data from last year, you’ll see that China is our number one hotspot for software license misuse and piracy. Earlier this month, when we hosted BSA (along with SIIA and FAST) for our annual Software License Compliance and Piracy Panel they stated that Asia has a 63% piracy rate which translates to close to a $21B commercial value for pirated software. 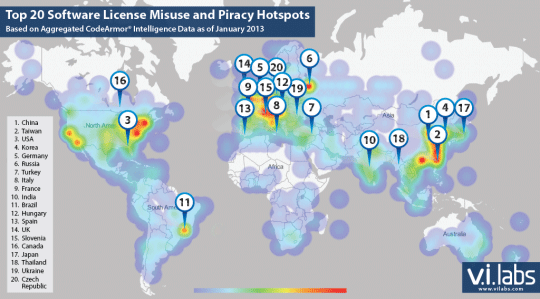 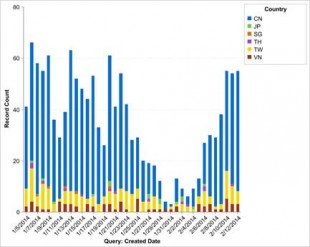 Like I said, this isn’t groundbreaking news. However, I did come across a very cool data trend last month that mirrored what we saw last year. When I was looking at aggregated customer data for new piracy infringements, I noticed a large dip in the number of infringements per day. When I dug into this a little more I realized the dip was attributable to the Chinese New Year which was celebrated beginning on January 31st – suggesting that the dip we saw last year at the same time was not an anomaly.

I decided to pull some queries for previous years and the data trends all showed the same dramatic dip in piracy activity during that time. I then expanded my search to include other traditional holidays and I was able to find another similar instance during “Golden Week” which is celebrated in October. 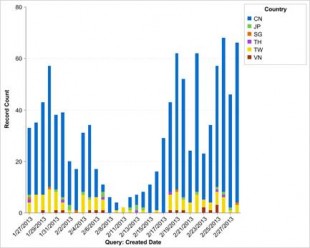 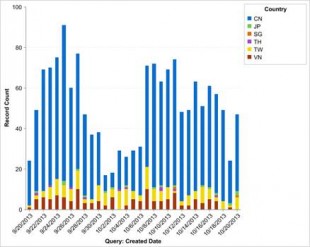 With the United States being 3rd amongst V.i. Labs hotspots for unlicensed use, I decided to look into some traditional holidays here to see if they had a similar impact. Though dips in activity during Thanksgiving and Christmas are visible in our data trends, they are not as dramatic.

The dramatic dips during those times is just another way to see what a huge impact users in China have on piracy, and in turn, software revenues. Of course, the fact that our customers have data on new (and continuing) piracy infringements gives them a huge advantage over other software companies that are waiting for a whistleblower to call or are sifting through anecdotal evidence.