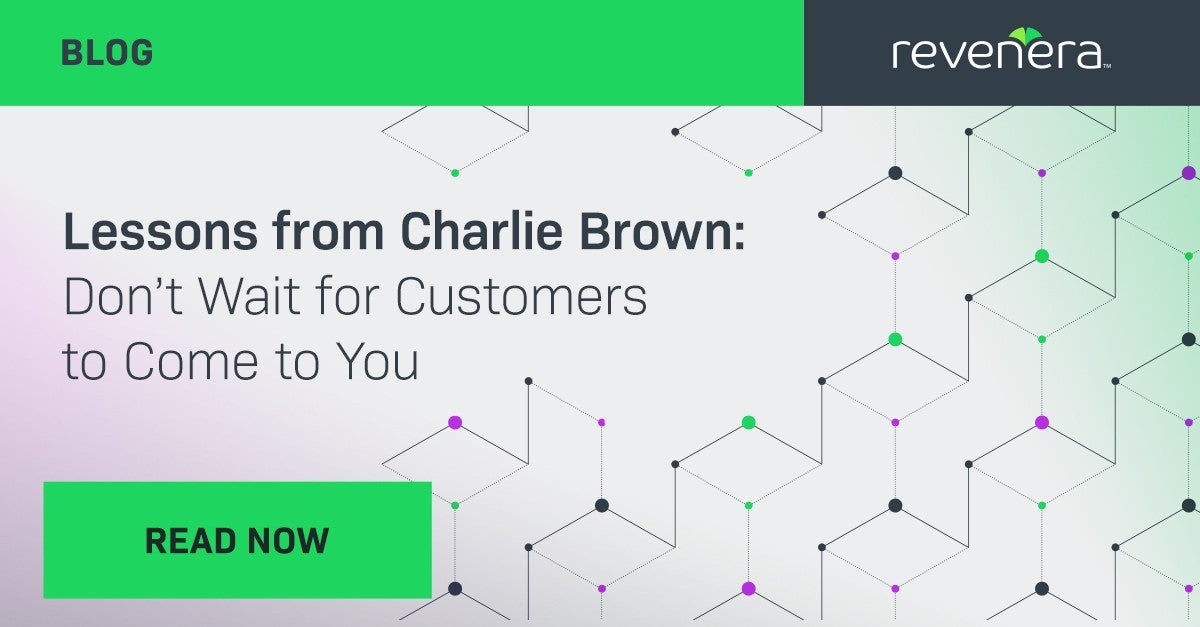 A holiday special that has truly stood the test of time, “A Charlie Brown Christmas” turns 55 this year. It’s hard to pick my favorite part (especially if you include Vince Guaraldi’s amazing jazz score), but some great lines come from Lucy Van Pelt and her “psychiatric help” booth. Charlie Brown walks up to Lucy’s tricked out lemonade stand, and in typical fashion, plunks a nickel into the can and shares his troubles. In this particular instance, her usually cutting wit is muted (perhaps because it’s the holidays) and she tells him: “Well, as they say on TV, the mere fact that you realize you need help indicates that you are not too far gone.”

In the recent Revenera Monetization Monitor: Software Usage Analytics 2020 report, our survey of more than 250 software supplier professionals revealed that many of them may be adopting Lucy’s philosophy. Asked to name the most effective method of collecting data about their customers, those that did not collect usage data named support calls. They’re waiting for their customers to realize that they need help and come to them with problems, all with the hope that they’re not too far gone.

I probably don’t have to give you my 5 cents here (but I will): waiting for customers to come to you with their problems begets more problems. A customer-centric software development strategy is holistic – and includes proactively getting quantitative feedback and metrics from customers as well reacting to support calls (and gathering other qualitative feedback).

Support calls can provide valuable and very actionable data if you have the right context – such as what percentage of users have the problem, similarities by computing environments, and whether it requires an immediate fix or is something queued up in a new release that needs to be tweaked. But without that context, suppliers risk prioritizing minor issues over major ones, wasting resources and gaining no valuable insight to inform development of functionality that proactively addresses and hopefully prevents the issues that a wider range of customers might experience.

This is why more and more software suppliers show a growing interest in collecting and understanding software usage data. More than half in our survey (60%) collect usage data today and that number is expected to grow to a total of more than 75% in the next two years. Suppliers that collect usage data have a holistic look at their customers that goes far beyond the problems they call in with. This allows several sources of customer data – usage intelligence, customer interviews, sales calls, and even support calls – to work in concert with one another to strengthen and more accurately represent the customer voice.

Take Extensis, for example, a software supplier that sells digital asset management tools. The company, founded in 1993, had thousands of customers who had been with them long before runtime intelligence was available and little visibility into their usage patterns and computing environments. Extensis wanted to know how its entire customer base was using its applications, with the aim of bringing the voice of the customer into its agile development processes. This would allow it to prioritize features more effectively and understand more about use cases – both to improve existing solutions and build new functionality.

One major benefit of deploying Usage Intelligence was the insight it gained into the attributes of its customers’ computing environments. Instead of supporting every browser and operating system, it now had exact information on its customers’ actual computing environments to make decisions on what to support. This helps them direct QA resources more effectively to decrease waste on edge cases and configurations that are rarely used. Having this insight has already translated to savings of $10,000-$20,000 per release in QA time alone.

A holistic approach to data collection will help software suppliers both better address customer needs and anticipate them to deliver functionality before they even know they need it.

Walking around her booth to commiserate with Charlie Brown, Lucy tells him she know how he feels, saying “I never get what I really want. I always get a lot of stupid toys or a bicycle or clothes or something like that.” When asked what she wants, she says, “real estate” – an unexpected response that would be hard to predict. I would predict that most product teams have had similar experiences delivering features that customers really want. To really deliver what your customers need, you have to know a lot about them and how they engage with your applications. Software usage data provides insight to help you answer questions or ask the right questions so that you can give your customers what they really want – year round.