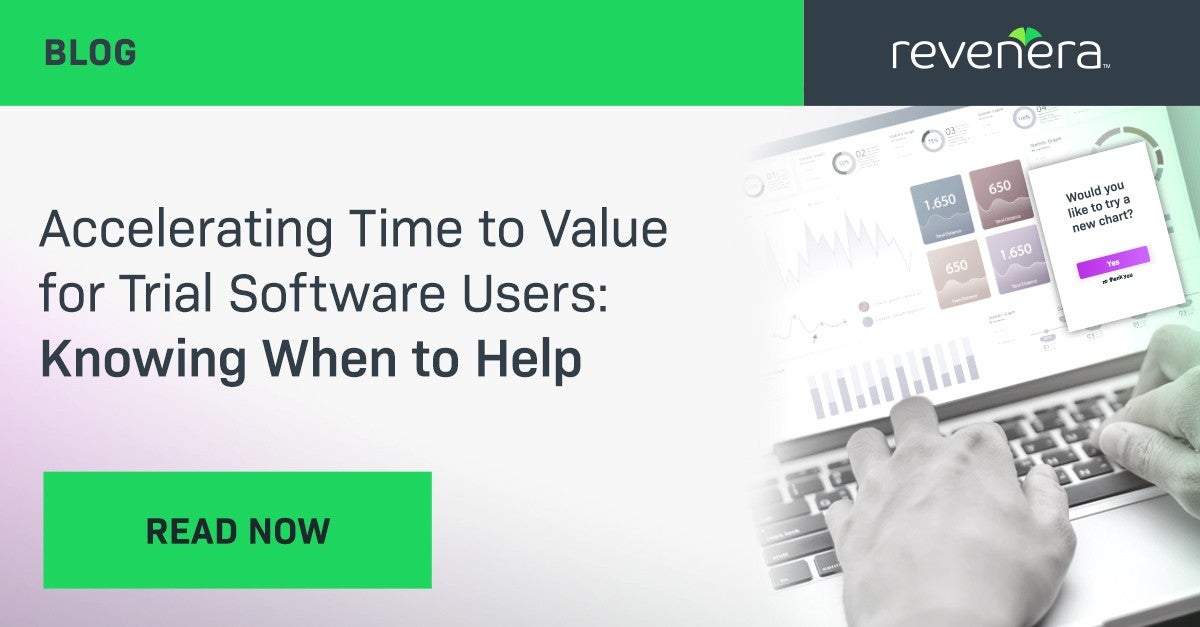 Fans of the groundbreaking comedy Seinfeld will likely remember the episode in which Kramer gets a new phone number similar to “Moviefone” (for those under the age of 34, this was a service that provided an automated listing of movie times, that still exists in a different form). Predictably, hilarity ensues when George tries to call Moviefone but reaches Kramer who pretends to be the computerized service on the other end. After George presses the numbers corresponding to the letters in the name of the movie (which Kramer obviously cannot “translate”), Kramer finally blurts out, “Why don’t you just tell me the name of the movie you selected?”

This episode came to mind when I was thinking about how to best get trial software users to quickly realize the value of a new application (seriously, I have binged a lot of sitcoms during the pandemic and my mind can wander to software monetization topics). When do genuine attempts to help the end user actually present roadblocks to what they’re trying to accomplish, possibly reaching the level of being wildly unhelpful? Despite Kramer’s best intentions, George did not find the value he was seeking because Kramer could not understand exactly what George wanted.

Identifying What Users Need for Success

Accelerating the time to value is a challenge that TechSmith considers carefully when onboarding its new users. In a recent conversation on turning trial users into successful customers, Daniel Foster, (who leads strategy for TechSmith’s Snagit product) talked about the importance of connecting features to value early on in the user journey. His team knows the importance of achieving a balance between introducing users to the things the product can do for them quickly enough to engage them and provide value, but not so quickly that it becomes overwhelming, pushy or unhelpful.

TechSmith has compiled a list of nine common customer tasks it presents to trial users to help speed onboarding and time to value for new users. This list was developed by using external user feedback on jobs to be done combined with usage analytics on how users moved through different workflows to validate that the functionality they used was significantly different and would require different onboarding and education.

When they start a trial, users are asked for information in a form on what “job” they’re trying to accomplish. If they are, for instance, trying to build a new technical guide, they’re presented with relevant training, onboarding and coaching information. This information gets pulled in as a custom property in Revenera Usage Intelligence that TechSmith can then use to target and focus messages to those specific users, e.g., “We see you’re trying to create documentation or a technical guide, here are some features that are important.”

That last line may sound familiar to mid-90s Microsoft Windows users. TechSmith’s Foster referenced this when asked about guiding users when they’re not going the way you expect them to: We all remember Clippy. That was not helpful for a lot of people. It’s always a challenge to know how much is too much, how pushy can you be. Because you’re ultimately trying to help the user but sometimes it doesn’t feel like help.

Instead of introducing valuable functionality at the wrong time or cadence, and risking a user walking away from a trial, TechSmith leverages software usage analytics to enable a targeted and measured approach to what it communicates and when. Onboarding content displayed to specific users must follow three principles:

Leveraging user segmentation capabilities from usage analytics, TechSmith can determine whether informing a user about a feature they haven’t discovered yet will be helpful or too Clippy-ish.

How does TechSmith serve up this content? One of the ways they’re seeing much success is a very muted, modest in-app banner in which the content dynamically changes based on usage (powered by the in-application messaging functionality in Revenera Usage Intelligence). Side-by-side tests showed that people interact with the targeted, changing content more. What’s more, as TechSmith continued to track engagement, they saw that the more people interact with the content, the more successful they are with the product. TechSmith gives users the option to shut this banner off entirely – as well as choosing what types of content they see on it (e.g., relevant training, webinar, promotions, etc.).

Software vendors like TechSmith are leveraging usage intelligence to accelerate the time to value by ensuring trial users are deeply connected to the functionality needed to do their job from their first days with the software. It’s no wonder that software suppliers are more interested in collecting usage intelligence, with the number expected to grow to 75% within the next two years, as our Monetization Monitor: Software Usage Analytics in 2020 reported. Yet just 1 out of 3 said they feel they currently do a good job of collecting usage data and another 28% require manual intervention to use the data they do collect.

TechSmith is providing trial users with the right information at the right time with the help of usage analytics, user segmentation, and in-app messaging. And now, customers are more engaged in the content and more successful with the product – or, if you will, happily watching the movie instead of giving up because they can’t even figure out what time it’s playing.