One of the things that we teach students in the InstallShield and AdminStudio training classes is to use advertised shortcuts if at all possible. A Windows Installer advertised shortcut causes Windows to verify that all of the application’s component key paths are in place before launching the application. If a key path is missing, Windows Installer will try to repair the application before launching the program. This is an appropriate way to repair user-specific data, including files in the user’s profile directories (e.g. “My Documents”) and registry data in HKEY_CURRENT_USER. We often see the need to repair user-specific data if one user installs a program and then a different user logs onto the computer and tries to run it.

Advertised shortcuts work well for repairing user-specific data if the application has shortcuts. What about programs that don’t have shortcuts, such as add-ins for Microsoft Office? For these cases, Windows offers the Active Setup registry keys. These are two registry keys that Windows uses to decide whether an application is installed for a user as they are logging into Windows.

The basic idea is to create a per-machine registry key in HKEY_LOCAL_MACHINE and then compare that key with a similar key in HKEY_CURRENT_USER. If the version information in the keys is different, then Windows runs a command specified in the HKEY_LOCAL_MACHINE key and updates the version data so that the command does not run again. A flowchart of the process is shown in Figure 1.

To make Active Setup work with your setup, you must have the setup write values to the following registry key:

This registry information is shown graphically in Figure 2, which shows an example InstallShield project with Active Setup data. Note that the Version value is delimited with commas, not periods. 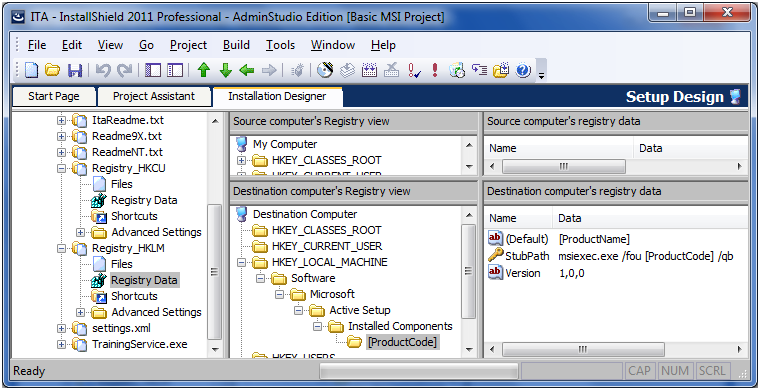 When the end user logs into the computer, Active Setup will compare the registry key in HKLM with the corresponding key in HKCU. If the version in HKCU is less than the one in HKLM or the HKCU key does not exist, Windows will copy some of the values from the HKLM key to the HKCU key and then execute the command in the “StubPath” value.

At some point, the user who originally ran the setup will log off and then log into the computer again. If the setup did not write any Active Setup information to HKCU, Active Setup will run the repair unnecessarily for this user. The solution in this case is to use the setup to write some additional registry data to the HKCU key. The key and values are shown graphically in Figure 3 and the text of the values is shown below. Note that this data does not include a StubPath value.

After installing the program, the user who installed it will be able to log off of and back onto Windows without seeing a progress dialog from Windows Installer. Any other users will see the Windows Installer progress window, show in Figure 4, the next time they log into Windows as the setup writes missing data to their profile.

Considerations for Deploying Setups that use Active Setup

In an environment where users don’t have access to network servers, you may want to copy the source media to a location like:

By putting the installation media in a commonly accessible location, you are ensuring that Windows Installer will succeed in repairing the application’s per-user data regardless of which user initiates the repair.

Leave a Reply to Christopher Painter